CHILDBLOOM GUITAR PROGRAM CELEBRATES ITS 40TH BIRTHDAY  THIS MAY!

Aytahn Benavi, a student of Kevin Taylor, recently participated in the Ex Aeque Artist International online competition. Over 145 entries of professional guitarists of all ages participated with video entries. There were 24 semi-finalists and eventually 12 finalists who performed a live set online. Aytahn made it to the finals – the youngest player involved – and then received 1st prize!  Aytahn did not prepare for the competition, having sent in his entry 2 days after he had heard about it! This shows how important it is to keep one’s skills ready for performance! Aytahn is a senior in high school. He is the son of Hillel & Irit Benavi of Austin.

Zara Terrazas-Graham of Austin won 2nd place in high-school division at the very-difficult and prestigious, Texas Guitar Competition and Festival in early March. Congratulations to Zara!

3 Childbloom teens have reached the semi-finals in the prestigious Stroud Competition in Cleveland. There were 41 applicants and 15 were chosen. Aytahn Benavi (17) is from Austin, Tx.. He is a student of Kevin Taylor. Kassandra Hughes (15) is from St. Charles, Mo. Her teacher was Chris Peleshenko. Nate Hill (17) is from Spartanburg, SC. His teacher is Michael Miller. This is an outstanding achievement from these young players. We are proud that the Childbloom Program is represented so well by these young artists.

Aytahn Benavi, a 17 year old Austin student of Kevin Taylor, recently competed in The Guitar Foundation of America’s International Sr. solo Competition. Aytahn competed against 40 of the best young guitarist in the world.  He was awarded 3rd prize, representing the only guitarist from the U.S. You can view the finals between the great young talent of Canada, Croatia, USA & China here.

Austin Bella Corda Guitar Ensemble competed in the recent Hill Country Guitar Ensemble Festival and earned first prize! They competed against high school groups from Austin and Houston. The group performed 4 pieces: a work by contemporary composer, James Chang, an Alemaign by Thomas Robinson, an original arrangement called Playing With Play With Fire by Kieth Richards and Mick Jagger and the Allegro Movement of the quartet for 4 violins by Telemann. We just found out that  Aytahn Benavi, competed at the “Domain Forget” guitar festival in Quebec, Canada. Although only 16, Aytahn competed in the college division, playing “Caprice 1” by Mario Castlenuevo Tedesco, “Etude 12” by H. Villa Lobos and “Joyful Island” by Angelo Gilardino. He won 1st prize! This includes an honorarium, full tuition next year and a concert at the festival! Congratulations to Aytahn on his well-deserved awards! Aytahn began in the Childbloom Program at age 5 with Chris Stone. He is currently studying with Childbloom Founder, Kevin Taylor.

The latest Round Rock students news is that students can and are contributing canned food for the Round Rock Food Bank every week. The Round Rock studio is now a drop off point for donations. So bring a can to your lesson! Lets see how quickly we can fill up that barrel!

The Austin Bella Corda guitar ensemble performed before the Round Rock Symphony’s initial performance for this year’s Festival of the Arts. The theme of the Festival was music of Latin America. The group performed music by Astor Piazzola and a selection of arrangements from South American and Mexican folk traditions.

The Childbloom performing group, Austin Bella Corda, played for a Mother’s Day Concert at Festival Hill in Round Top on May 15, 2018. They performed in the Edythe Bates Chapel.

On Sunday, Dec. 17 from noon until 1 pm, the 30 piece Childbloom Christmas Guitar Choir will decorate the Texas Capitol with the sounds of Christmas. This is the 12th year students from The Childbloom Guitar Program have performed their holiday classics in this glorious rotunda. Everyone is welcome!

30 young guitarists will perform accompaniment to a reading of the traditional O’Henry Christmas story, “Gift of the Magi” on Saturday, Dec. 16 at 2:30 in the Round Rock Library. This is the 10th year the Childbloom students have presented this Christmas classic. Introduce you family to this inspiring story by one of America’s greates storytellers. Free and open to the public.

AUSTIN BELLA CORDA PERFORMS IN ROUND ROCK AND GEORGETOWN

Childbloom’s premier performance group will play Saturday, Oct. 15 at the Barnes & Nobles “Bookfair” in Round Rock at La Frontera. This is the first performance of the season of the re-formed group. They will play at 7 p.m.

Austin Bella Corda will also perform Sunday at 1 pm at Grace Episcopal Church in Georgetown for a benefit for the victims of hurricane Harvey. Austin Bella Corda is an elite performing group of students who started guitar with the Childbloom Guitar Program. Even though all the players are teenagers, many of them started at age 5 and 6. In June they traveled to Fullerton California to compete in the Guitar Foundation of America‘s International Ensemble competition. They competed against conservatory groups from California and Arizona. We are happy to report that the group was awarded the top prize of 1st place! You can see and hear their competition performance here.

They performed works by Astor Piazzola, Mozart and an original work by Director, Kevin Taylor. Participation in Austin Bella Corda is free but students must audition each year.

Dec. 9, 7 pm at Ken’z Guitars on the square in Georgetown, the premier guitar ensemble of the Childbloom Program, Austin Bella Corda, will give a free performance. Come on out and hear some great playing from these kids!

Dec. 17, noon, the Childbloom Christmas Guitar Choir will perform in the Rotunda of the State Capital building.

Dec. 18, 4 PM in the Round Rock Public Library the Childbloom Christmas Guitar Choir will accompany a reading of O’Henry’s “Gift off the Magi.” Introduce your family to this inspiring story of the season from one of America’s created storytellers.

In June of 2016, Aytahn Benavi, a 14 year old student of Kevin Taylor, recently was awarded 2nd place at the Guitar Foundation of America’s International youth guitar competition JR. Division. He competed agains dozens of the world’s finest young players. This is the toughest competition in the world and Aytahn showed that he is one of the best players in the USA. In October he was awarded 1st place in the Texas A&M Guitar Symposium high school competition and the Indiana University high school guitar competition. Congratulations to him for his outstanding work!

GUITAR DAY IN DOWNTOWN ROUND ROCK ON APRIL 30 At 11 am pedestrians may walk by one of our volunteer ”Sound Oasis” teams, students playing near the Plaza and on the street to provide a bit of musical interest and beauty for pedestrians and passer-byes.

At 3 pm, Childbloom students of Round Rock and Austin will have an open mic at Star Coffee on Main Street.

At 7 PM in ArtSpace, the Austin Bella Corda Guitar Ensemble will perform a ”Sunset Concert.” This concert will also feature the award-winning soloists, Aaron Mink and Aytahn Benavi. This is free. Seating is limited. Come early

A 14 year old student of Kevin Taylor, Aytahn Benavi, just was awarded 1st prize in two national youth competitions. He traveled to Columbus, Georgia and performed in the youth competition, at the Columbus Guitar Symposium. He also competed in the University of Dallas Sr. Youth competition and took 1st place. We congratulate Aytahn on his impressive achievements!

”GIFT OF THE MAGI”

A reading. Free and open to all ages. Introduce your family to this inspiration seasonal favorite,  Saturday, December 12, 5 PM at the Round Rock Public Library. Music by the Childbloom Christmas Guitar Choir. Austin/Round Rock Instructors, Adam Carney, Jody Moseley, Chris Stone and Katie Kerwin just put on an open mic for any students who wished to participate. And WOW! did they. Childbloomers packed the New World Cafe. Students from the most beginning to the most advances performed. What a great outpouring of young guitarists! 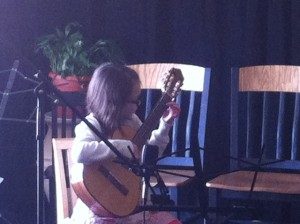 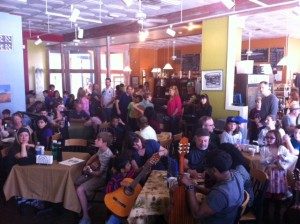 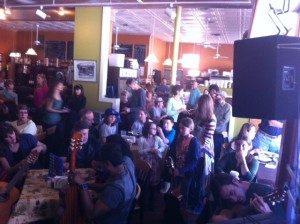 THE 12TH DAY OF CHRISTMAS IN ROUND ROCK

The Childbloom Christmas Guitar Choir will accompany a reading of  O’Henry’s ”Gift of the Magi” on Dec. 13 in the Round Rock City Council chambers. This group is comprised of 24 Childbloom students. The performance is free!

Aytahn Benavi received 1st prize at the Texas A & M Jr. youth guitar competition in October. He competed against 14 other players from around the state. He performed two pieces. He started guitar lessons at age 5 with Childbloom Instructor Chris Stone and now studies with Kevin Taylor.

The University of Houston’s Classical Minds festival featured two youth competitions that included young players from around the United States and beyond. We are pleased to announce that two Austin/Round Rock students of Kevin Taylor received top awards at that festival. Aytahn Benavi (12) won 1st in the Jr. competition performing Giuliani’s Op.15 2nd mvmnt. and ”Tango de Lejos” in a perfect performance. Avi Medina (17) was awarded 2nd place for her spellbinding set of ”Lament” by Mark Cruz, ”Fantasie VII” by Dowland, ”Usher Waltz” by Nikita Koshkin and ”Maria” by Tarrega. All the players were at an extraordinary high level and we congratulate our young artists for their work and beautiful efforts. 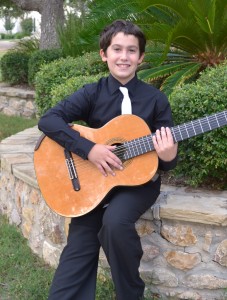 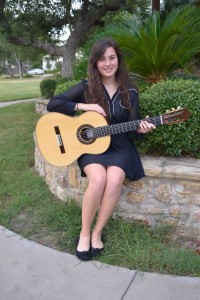 AUSTIN BELLA CORDA TO PERFORM AT ST. MATTHEW’S EPISCOPAL CHURCH MAY 31, AT 7:30 PM Austin Bella Corda is a unique performing group of older Childbloom students. They play music from the Medieval to the Rolling Stones. Bella Corda™  Groups have performed in Washington, South Carolina, St. Louis, Dallas, Ft. Worth, San Antonio, Houston, and Austin. In 2010 a national Bella Corda group of Childbloom students won ”The Best Youth Ensemble” Award at the the Guitar Orchestra Festival and Competition in Bad Nauheim, Germany. This is a benefit concert for Heifer International. 12-year old Childbloom student, Aytahn Benavi was awarded 1st prize at the University of Dallas Youth guitar Competition on March 1. Aytahn competed in the under 14 category. There were dozens of competitors from around the state and beyond. Aytahn began his studies with Chris Stone at age 5 in the Childbloom Guitar Program. He currently studies with Kevin Taylor. Aytahn performed 2 pieces for the judges: Prelude from J.S. Bach’s 1st Cello suite (BWV 1007) and Tango de Lejos by Maximo Pujol.

Appearance on the national NPR radio show “From The Top”

2nd prize at U. of Houston’s “Classical Minds” Sr. Competition